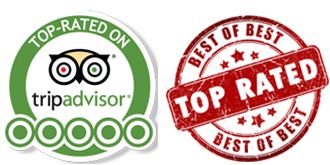 Private Tour Price: 275EUR P.P.
(Group Discounts Available from 15% to 30%)
This tour can start from Lisbon, Sintra or Cascais
With Private Driver/Guide and Transportation
Duration Flexible up to 8h

Only 20 min from Lisbon, this is our bestseller tour, and to discover why Sintra is one of the most romantic villages in the World and considered as Unesco World Heritage since 1995, including also a visit to Cascais, old fisherman village, with the amazing landscape, passing Cabo a Roca, the Westernmost Point of Europe, once called “The End of the World”, until 500 years ago when the American continent was found. The tour will be crossing Sintra/Cascais Natural Park throughout the day.

You will have opportunity to visit the romantic Royal Pena National Palace, considered in 2015 by EBD the Most Beautiful Castle in Europe, built on the ruins of an old 16th century monastery. A stop for Lunch will be done nearby the village or at the coast of Sintra (lunch not included).

Then, we will follow to Cape Roca, Europe’s Westernmost Point on the coastal cliffs of Sintra, passing by the beautiful roads of the village. Down the hill, we will pass by Guincho. You will than be able to visit Cascais Bay, and some free time to taste one of the best ice creams in the World: Santini. The tour will end passing by Estoril, , extremely famous during World War II, where several known spies settled, and where 007 James Bond was born by Ian Fleming, the famous MI6 spy.

THIS IS A PRIVATE TOUR – Includes Transportation and Private Guide.
TO BOOK THIS TOUR, PLEASE CLICK “BOOK NOW” BUTTON BELOW
Book Now

The Golden Triangle Private Tour will show you the most important attractions in Sintra, former summer Royal Residence of the Portuguese Kings, along with visit to the Westernmost Point of Europe (Cabo da Roca) and the village of Cascais and Estoril. Although the itinerary can be adjusted during the day, this is the standard itinerary:

* Importante Notice: Between April and September 2018, the visit to Pena National Palace may take longer than usual, specially if starting the tour later. On this case, the visit might be a self-guided visit of the exterior only.
* Times on each stop may vary, depending on group pace and preferences, since all our tours are private.
* Admission fees and lunch/meals are not included.
* if you wish to visit inside all major attractions in Sintra, we recommend booking two days

Sintra Magik Private Tours has been awarded over the years for the top quality service offering their customers.

We work with a recent fleet of Mercedes-Benz vehicles, that are operating everyday for your comfort. In case of need, we have other vehicles or different brands/models, including larger minibus and big bus as well (on request). Please note that we can never guarantee any vehicle brand, type or model for any tours.

* We have a flexible worry-free cancellation policy for your comfort – BOOK WITH CONFIDENCE:
– We know plans can change and we accept changes to the original booking for another day, if we have availability, without any extra charge
– In case your trip needs to be canceled/postponed, the customer will be able to use the full amounts paid, as credit, that can be used for any future trip, within 3 years time, according to the following policy terms. No amounts will be lost, in case you need to reschedule/postpone/cancel your trip.

Tour Language: This tour is available everyday in English. Other languages only per request (French),Spanish and Portuguese)

* This is a private tour and prepared for Full-Day (around 8h), although, if you have shorter time, we can fit it to your needs
* Most of our tours are done using minivans for your comfort (more leg room). For larger groups we have available larger buses/motor coaches. Vehicle type, size, brand or color can never be guaranteed on our regular tours.
* Price for one of two adults is the same.
* Pick-up and drop-off in Lisbon (Hotel, Airport, etc), is complimentary / Pick-up and drop-off at other locations please inquire.
* We advise to book this tour at least 3 months in advance. For last minute bookings please call +351.30.880.4698
* Check in is recommended at the meeting point 15 minutes before departure time
* Prices, times and itineraries are subject to change without prior notice